Seascape from the Cemetery of Campo degli Ebrei, Ancona
2047
0
0

Jews were living near Ancona since the first century. By 1300, they had organized a Jewish community within the city. A letter from that time, sent by the poet Immanuel ben Solomon of Rome, pleaded for exemption of the Ancona community from heavy taxation, due to economic hardship and persecutions. Jews engaged in money lending starting from the first half of the 14th century. In 1427, the Franciscan Giacomo Della Marca attempted to force the Jews in Ancona to wear the Jewish badge and to restrict Jewish residences to a single street, yet the attempt was unsuccessful. In 1492, refugees from Sicily began to arrive in Ancona, joined by others from the Kingdom of Naples after 1510. An order mandating the wearing of the badge was again issued in 1524, but was revoked four years later. 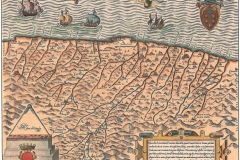 When Marche became part of the Papal States in 1532, Jews were still allowed to live in Ancona. Jewish presence was sought and encouraged in Ancona, declared a free port by the various Popes who regarded the city as the Levantine port of Rome. At first mercantile interests prevailed. Pope Paul III invited Levantine merchants to settle there regardless of their religion. In 1541, he encouraged the settlement of Jews expelled from Naples and in 1547 extended the invitation to crypto-Jews, to whom he promised protection against the Inquisition. However, in 1555 his successor, Pope Paul IV, began instituting anti-Jewish measures in the Papal States.

Jews were segregated in a ghetto, prohibited from owning property, and restricted to trade in second-hand clothing. Papal opposition to the crypto-Jews proved implacable. Twenty-five of them were burned at the stake in Ancona in 1555. Following these events, Dona Gracia Nasi, a rich Jewish merchant, organized a boycott of the port of Ancona. Historians view her actions as the first attempt by Jews to utilize economic power as a weapon against persecutors.

Ancona was the only other city besides Rome where the Pope did not expel the Jews in 1569. Jews were tolerated because of their utility in the Levant trade; nevertheless many decided to leave. The favorably disposed Pope Sixtus V afforded greater liberties to the Jews. Ancona was again exempted when Clement VIII renewed the decree of expulsion in 1593. But the ups and downs of Jewish fates continued, even as late as 1775, when Pope Pius VI again enforced and overall extreme anti-Jewish legislation.

Under Napoleon, during the French occupation of Ancona between 1797 and 1799, the most humiliating provisions were abrogated. The gates of the ghetto were removed. Samson Costantini and David and Ezekiel Morpurgo, all three Jewish, sat on the new municipal council. The Jews were obliged to contribute heavy war levies. In 1814, after Napoleon’s downfall, Ancona reverted to the Papal States and the former legislation was reintroduced. The two revolutions of 1831 (when the ghetto was opened again) and of 1848, generally engendered a more liberal attitude. The Jews obtained complete civil rights only in 1861, when Ancona was included in the Kingdom of Italy. (About Napoleon in the Matauro region>)

The Jewish population of Ancona numbered 1,400 in 1789, and approximately 1,600 in the 19th century. During World War II, the Jews suffered persecution at the hand of both Nazis and Italian Fascists. After the war, only 400 Jews were left in Ancona and their numbers continue to drop.