Santa Maria al Bagno was the largest DP camp in southern Italy. Established in 1943 when the first group of 500 refugees arrived in Puglia. At its peak in early 1946, the camp housed 2,300 Jewish refugees and about 3,000 non-Jewish refugees. The camp was structures in four sites and more than half of the refugees were lodged in summer houses requisitioned by the Allied forces.

According to an UNRRA report of 1946, the majority of the Jewish refugees had requested a visa for the United States. A series of complaints about the silence of the US Consulate suggests that these requests were for the most part rejected. 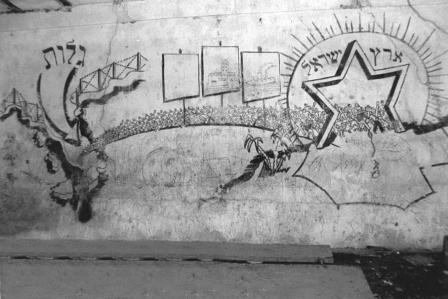 erved as the administrative center for several illegal Jewish immigration operations.  On April 11, 1946, the Jewish leadership of the camp organized a hunger strike in protest of British limitations on immigration to Palestine. “It is the foundation of rights of humanity for everybody to have the possibility and the right to a home,” the committee wrote to British authorities. The camp committee disseminated information to DPs by posting a weekly bulletin, culled from American and British radio news, that was distributed among the four locations.

In March 1946, 258 children aged ten to eighteen, attended the two schools in the camp. A youth village supported by ORT and volunteers of the Palestinian Brigade organized classes, sports, work and lectures, achieving remarkable progress despite a lack of supplies, books and games.

In addition, approximately 20 students attended nearby Italian schools. Adult education included classes in Hebrew and English, as well as training in tailoring, cutting and electrical science. There was a camp theater group and a “Macabi” sports team which held several matches with Italian teams in nearby Lecce. A kosher kitchen accommodated the camp’s orthodox Jews.

In the summer of 1946, the Italian government became increasingly involved in the UNRRA operations, placing restrictions on new influx of refugees and on the permanence of those who were in the nearly 30 DP camps in the peninsula.  The Southern Puglia camps formally closed in 1947, with an order to transfer to a DP camp in Rome the 600 Jewish refugees who had remained there.

Image: Museum of Memory, Murals made by internees of the DP camp of Santa Maria al Bagno (1945)