Jews settled in Florence before 1400. They were not needed in this flourishing commercial city – the scene of factional strife between the Guelfs and Ghibellines – as there was an abundance of capital, the Florentines being the greatest speculators and the most rapacious usurers of the Middle Ages. But having admitted the Jews, the Florentines granted them many rights and privileges at once . In 1414, a Jewish banker, “Valori” by name, to Milan to represent the Republic before the Duke of Visconti. As the latter refused to receive a Jewish ambassador, Florence declared war against him. This friendly attitude of the Florentines, however, was as subject to change as their government; the Jews were expelled and readmitted at the pleasure of the Senate. That Jews were in the city in 1441 is indicated by the fact that a “maḥzor” according to the Italian ritual was written there and sold in that year (Zunz, “Ritus,” p. 84).

Expelled During the Plague

One of the first Jews of Florence is known by name as Emanuel b. Uzziel da Camerino, for whom Codex Montefiore No. 219 was written (1458). A Jewish physician by the name of “Abramo” was called in to amputate a leg of Giovanni delle Bande Nere, the ancestor of the house of Medici. The favorable attitude toward the Jews seems to have changed in 1472, when all the Jews were expelled as a result of the plague raging through the region. Shemariah b. Abraham Jehiel wrote an elegy in commemoration of the event (Codex Merzbacher, Munich, No. 90). When the plague subsided in 1473, the populace demanded that the Jews be recalled as money-lenders, and for some years thereafter they lived peacefully in the city, protected by the Senate. When Bernardin of Feltre was preaching in Florence in 1487, the young men attempted to sack the houses of the Jews and slay the inmates; the authorities, however, expelled the preacher, who thereupon pretended that they had accepted large bribes from the Jewish population.

In the meantime, the house of Medici had risen to power and, under Lorenzo the Magnificent, Florence had become a center of art and science. The Jews also took part in this Renaissance.  Lorenzo called Jewish physicians and scholars to his court, among them Abraham Farissol. Elijah Delmedigo took part in a religious disputation in his presence. The philosophers Marsilio Ficino and Giovanni Pico della Mirandola studied the Hebrew language and the Cabala, and called a number of learned Jews to Florence; among these Elijah Delmedigo was especially noted as an expounder of the Aristotelian philosophy. Johanan Allemanno, a close observer of Florentine life, gives a good description of it in “Ḥeṣheḳ Shelomoh,” his commentary to Canticles.

As foreign traffic had widened the horizon of the Florentines, they hospitably received the Spanish refugees who, noted for their business experience, scholarship, and wealth, sought shelter in Italy. The first comers were followed by many other Jews and Maranos who had been driven by the Inquisition from Portugal. The community of Florence now became an important one and the city derived great benefit from the immigrants, who were in close intercourse with their co-religionists in Brabant, Lyons, Marseilles, Naples, Venice, Portugal and especially in the East, and carried on commerce in colonial products, silk and wool. All opposition to them was silenced in face of the services they rendered to the city. Expelled in 1490 (according to Ibn Verga, “Shebeṭ Yehudah”), they were recalled in 1492; expelled again, they were once more recalled in 1498, after being found indispensable to the commerce of the city. Among the Portuguese immigrants was the aged Don Joseph ibn Yaḥyah, who arrived at Florence with his sons in 1494.

The condition of the Jews was a favorable one under the first princes of the house of Medici. The Maranos were even allowed to freely exercise their religion and were not attacked during the plague of 1539. Cosimo II favored the Jews. His wife, Leonora of Naples, was taught by Donna Benveniste Abravanel, whom remained a lifelong friend. It was due to her influence that Cosimo granted extensive privileges to the Jews in 1551. At that time, they numbered at about 500, the majority living in the Via dei Giudei, beyond the Arno. Today, the street still bears that name. The political differences between the Medici and the pope were a direct advantage to the Jews, as the Medici paid no attention to the cruel papal decrees issued against them. However, the continual attacks bore fruit in the end. In 1570, the Jews were enclosed in a ghetto. Some streets not far from the Duomo, in the lowest and dampest part of the city, the Via della Nave, were assigned to the ghetto and enclosed by gates. In 1571, an insulting inscription was affixed to the gate of the ghetto. The communities of the outlying towns of Montalcino, Torricella, San Miniato, Monte Pulciano, and Prato were obliged to move into the ghetto of Florence. However, the anti-Jewish laws were never as strictly enforced in Florence as elsewhere. The wealthy Jews were permitted to live outside the ghetto and the inhabitants  were not treated harshly.

In the Seventeenth and Eighteenth Centuries
Toward the end of the seventeenth century, the city threatened to force all Jews within the ghetto, probably because many houses there were vacant at the expense of their Christian owners. Therefore, in 1690, the community was obliged to pay the entire rent of the ghetto. It was the underlying principle of Florentine legislation to treat the Jews as mildly as was consistent with the prejudices of the seventeenth and eighteenth centuries. The clergy combated Judaism through conversion, rather than by physical coercion. The baptism of children under thirteen years of age was regulated by law. Riots against the Jews occurred seldomly and were repressed by the government and the clergy. The attacks made at the time of the French Revolution in 1790 were quelled by the bishop. During the Napoleonic régime, the community shared in the varying fortunes of the city, alternating between freedom and oppression, until Florence’s autonomy was recognized in 1814. The gates of the ghetto were opened, never to be closed again, and the Jews were permitted to live outside its limits. Although no civic rights were granted to them, the Jews of Tuscany were treated so justly that they did not demand emancipation. However, it came to them in 1859, when the grand duke was expelled and the provisional government instituted. On this occasion, Sansone d’Ancona was appointed minister of finance. When Tuscany was annexed to the kingdom of Italy in 1861, the Jews received full citizenship in conformity with the constitution of 1848. None of the rights then conceded has since been abrogated and the Jews have always had a share in the government of the city since.

In the fifteenth century, the community had only one synagogue with the Italian ritual, but with the advent of the Portuguese Jews the Sephardic ritual also was introduced. The bitter struggle ensuing between the two nationalities was finally adjusted when both were recognized as of equal standing. Two synagogues were organized, with two rabbis, one for each ritual. The growth of the community of Leghorn strengthened the Sephardic party in Florence, which finally became dominant in 1903, when the majority of the Jewish community began to follow that ritual. The Sephardim have used the Portuguese language in their documents and their service up until very recent times. Other internal dissensions, started by Shabbethai Zebi, arose at the time of the movement. In spite of their rabbi, Johanan Ghiron, the community did not believe in the pretender, siding with Ẓebi’s two chief opponents, Jacob and Immanuel Frances, who were staying in Florence at the time. In 1660, Emanuel wrote a duet for the Society of the Anelanti (“Ḥebrat ha-Sho’afim”), which was sung in both synagogues.

For a time there was a Hebrew printing-press in Florence. In 1700, the first part of Aaron ha-Kohen’s (?) “Orḥot Ḥayyim” was published there, and various works appear around 1800.

In 1903, the community of Florence numbered at about 3,000 souls. It was governed by a council (“consiglio”) composed of sixteen members, who elected a committee of five from among themselves. There are two synagogues—the large new Sephardic synagogue, the “most beautiful synagogue of Europe,” built through the munificence of the director David Levi (d. 1869), and completed in 1882, and a small synagogue (Italian ritual) in the Via dell’ Oche. The ritual in both was Orthodox; in the larger synagogue there was a choir and an organ and the sermon was preached in Italian. There were two cemeteries, an old one dating from the eighteenth century, and a newer one dating from about 1875. There was a common school for boys and girls, in which much attention was given to Hebrew, in addition to the elementary studies prescribed by law. A Hebrew school prepared for entrance to the rabbinical seminary. The following philanthropic institutions were under the direction of the community: the Jewish hospital on the Arno; the Jewish orphan asylum, Achille Leone Athias; the Asili Infantili; Ospizio di Marina; Malbish Arumim; the society Arti e Mestieri. The societies Oavè Torà (with a large library), Ez Hajjim, and the more recent Meḳiẓe Nirdamim were devoted to the study of the Torah.

The Mattir Asurim Society, founded for the purpose of securing the release of Jews imprisoned for debt, supported a second synagogue with Sephardic ritual in a house in the Via dell’ Oche. There was a ḥebra kaddisha, societies for nursing the sick, “misericordia,” etc. Since 1899, the Collegio Rabbinico Italiano is in Florence. It was completely reorganized under the direction of Rabbi Margulies. 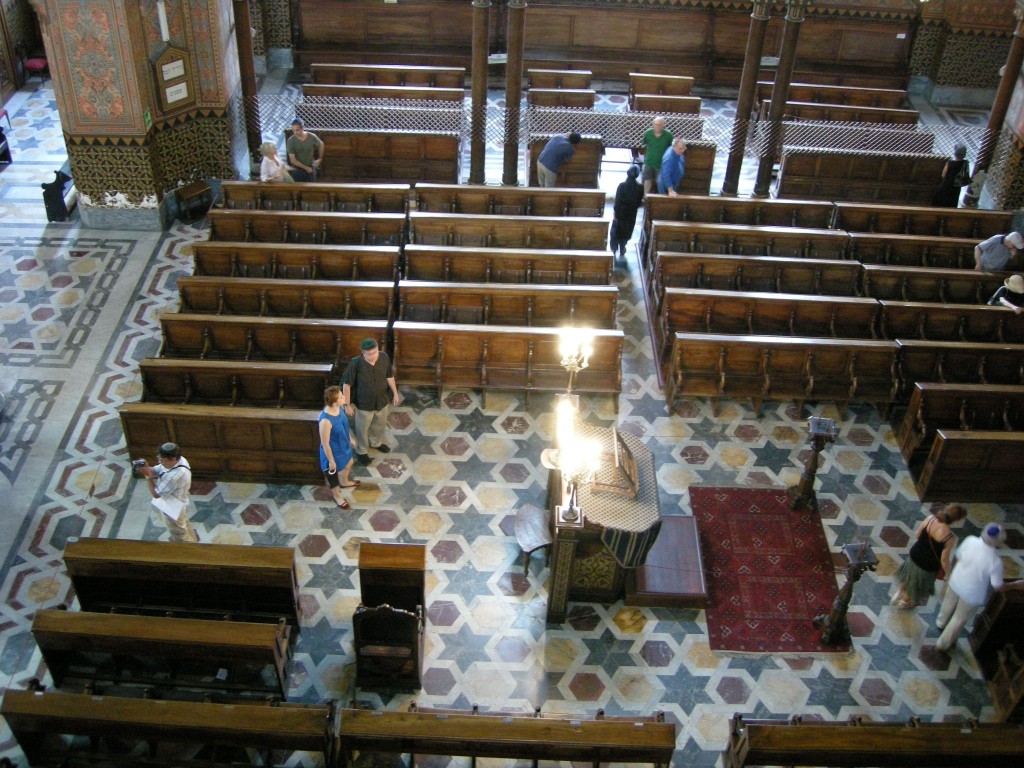 In 1931, there were about 3,000 Jews living in Florence. In 1938, the racial laws deprived all Jews living in Italy of their civil rights. Many Florentine Jews fled the country and others moved to surrounding areas. After the armistice of September 8, 1943, life for the Jews who had remained in Florence quickly deteriorated. Deportation began almost immediately and most Jewish families lost relatives. A unit of Delasem, the Italian Jewish relief agency, was active in Florence under the leadership of Rabbi Nathan Cassuto. Many of the members of Delasem were denounced,  including Rav Cassuto, and were arrested  and deported to Auschwitz. By the end of the war, the Jewish population had been reduced to less than 1600 people.