From Poland to Italy

La Giuntina is the publishing branch of the old and glorious Giuntina Press, founded in Florence in 1909 by a Polish Jew, the antiquarian bookseller and publisher Leo S. Olschki.

A humanist and book lover, Olschki drew the name “Giuntina” from the Florentine typographic tradition: a “giuntina” is one of the many valuable editions of the famous printers-publishers Giunta, who were active in Florence, Venice and Lyon between the 15th and the 17th century. Among their best-known edition was Boccaccio’s Decameron in 1527, which is called “ventisettana”.

Thirteen years later, another Polish Jews arrived in Florence (via Vienna and Jerusalem): my father Schulim Vogelmann. His brother, Rabbi Mordechai Vogelmann, who at the time was teaching Talmud at the Rabbinical College of Florence, invited the 20-year old Schulim to join him. My father had to find a job that would allow him to keep the Shabbat, not an easy task in those days. 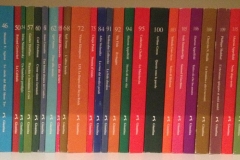 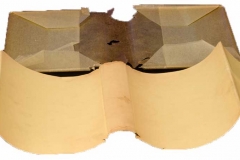 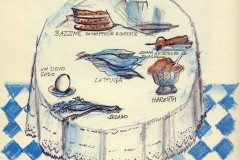 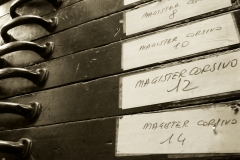 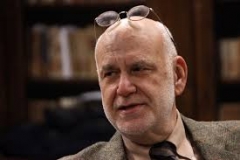 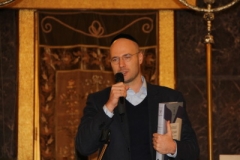 With this in mind, he showed up at the office of his coreligionist Leo Olschki looking for work. Olschki first hired him as a typesetter (which back then was done manually) and then, in 1928, appointed him director of the printing house. This was just before the arrival in Florence of the famous writer David Herbert Lawrence, who, at the suggestion of a friend, the bookseller Pino Orioli, chose Giuntina to print at his own expense the first edition of Lady Chatterley’s Lover, soon to become object of scandal.

A few years later my father married Anna Disegni, daughter of the Rabbi of Turin, Dario Disegni. In 1935, the couple celebrated the birth of a beautiful child: Sissel (which in Yiddish means sweet).

Those serene years did not last long. In 1938, Mussolini’s regime promulgated the infamous racial laws which stripped Italian and foreign Jews of their rights and livelihood. After the armistice of September 8, 1943, the Germans troops occupied most of Italy. My father, Anna and Sissel tried to escape to Switzerland, but were arrested at the border by the Fascist police and sent to Auschwitz. Upon arrival, mother and child were sent to the gas chambers, while my father was assigned to work in the camp with the number 173484.

Among the many more or less inscrutable reasons of his survival was certainly that he was a printer, and therefore useful to the German war effort.

La Giuntina publishes some of the most important Jewish journals and magazines including La Rassegna Mensile di Israel founded in 1925 by Dante Lattes, Materia Judaica, journal of the Italian Association for Jewish Studies directed by Mauro Perani and the series of studies of Jewish culture published by the National Museum of Italian Judaism in Ferrara.

After the liberation, my father returned to Florence, having lost both his wife and child.  All he found waiting for him was the faithful Giunta Press to which— probably to escape his memories— he devoted himself body and soul. Eventually he became the owner, and found the strength to remarry, with Albana Mondolfi, the widow of Raffaello Passigli and the mother of an 8-year old child, Guidobaldo. In 1948, I was born.

My father died in 1974, after a life dedicated entirely to his work. My brother Guidobaldo became the director of typography and continued to carry on with admirable talent.

As for me, this is not the place to speak of the great difficulties that I met to find my way: the life of a son of a death camp survivor, a so-called child of the Holocaust is never easy. At twenty, I wanted to become a writer, but I was only able to publish some book of poems.

After that, I entered the family business, but I could not settle: the job of a printer, though noble, was not for me. I confess that I felt rather desperate, yet my desperation helped me find a compromise: if I was not going to be a writer, and I was not able to be a printer, I would become a publisher.

So it goes that, with the help of my brother and my wife Vanna, in 1980, I founded the Editrice La Giuntina, which from the beginning specialized in Jewish topics. The first book of the “Schulim Vogelmann” series (dedicated to the memory of my father) was Elie Wiesel’s Night.

Wiesel was not known in Italy at the time and it was no accident that my activity began with one of the most harrowing testimonies on the concentration camps. In addition to publishing it, I also translated it into Italian. Two more volumes followed which were very important for me: I Didn’t Say Goodbye by Claudine Vegh and Children of the Holocaust by Helen Epstein.

At first, for obvious reasons, I was able to publish very few books, two or three a year. I did however acquaint the Italian audience with several works by Elie Wiesel, who in 1986, received the Nobel Peace Prize. I also had the satisfaction to discover the great Israeli writer Abraham B. Yehoshua, now a cult author.

In the following years, things improved and I continued with an average of 15-20 books a year spanning  from Shemuel Y. Agnon to Bruno Zevi. In particular, beside Night, I am proud of having published concentration camps’ testimonies that were important also from a literary point of view: Liana Millu’s Il fumo di Birkenau, Giuliana Tedeschi’s C’è un punto della terra, Jona Oberski’s Childhood, Benjamin Bender’s Glimpses: Through Holocaust and Liberation, Bruno Vasari’s Mauthausen, bivacco della morte  and Teo Ducci’s Un tallèt ad Auschwitz.  In addition to these, we published collections of interviews and essays on the concentration camps.

And finally, two works with which I have a special bond: the Pesach Haggadah illustrated by the great artist Emanuele Luzzati, and the Hebrew Bible, in Hebrew and Italian, edited by the late Rabbi Dario Disegni (Sissel’s grandfather).

Things are passing to the next generation: my son Shulim, after spending five years in Israel — where he studied History at the Hebrew University of Jerusalem — returned to Florence, where he wrote and published with success his “Israeli memories” Mentre la città bruciava. That book started a new Giuntina collection entitled “Israeliana”, dedicated to Israeli narrative.

Book after book, Giuntina developed a catalog of over than 300 titles, covering almost the entire “planet Judaism”: from literature to nonfiction, religion, poetry, music, theater, cookbooks as well as the history of Italian Jews.

Twenty-five years have passed since the beginning of my publishing venture, and the time has come for an initial assessment, certainly a positive one, both from a personal point of view, and I believe, objectively. As for myself, I managed to give meaning to my life and free myself, at least in part, of my sense of “guilt” stemming from having been born under circumstances that “normally” would not have allowed it. Objectively, I think I made my contribution to a greater knowledge of that strange and “mysterious” universe formed by Jews and Judaism. In a world where anti-Semitism (often disguised as anti-Zionism), racism and intolerance continue to manifest themselves in various ways, I believe that presenting a series of texts such as those in Giuntina’s catalog can not but help make (few or many) readers more tolerant and open to a true dialogue, based on mutual respect and the pursuit of truth. A dialogue that should always guide our actions as human beings and which alone can fight fanaticism.