Walking along Vico del Campo, a narrow road deep within this tangled ancient town, it is not unlikely to find odd, empty hollows on the facades of some sixteenth century buildings. We are in the heart of the ancient Jewish ‘ghetto’ of the ‘Lanterna’ (the old lighthouse symbol of the city). 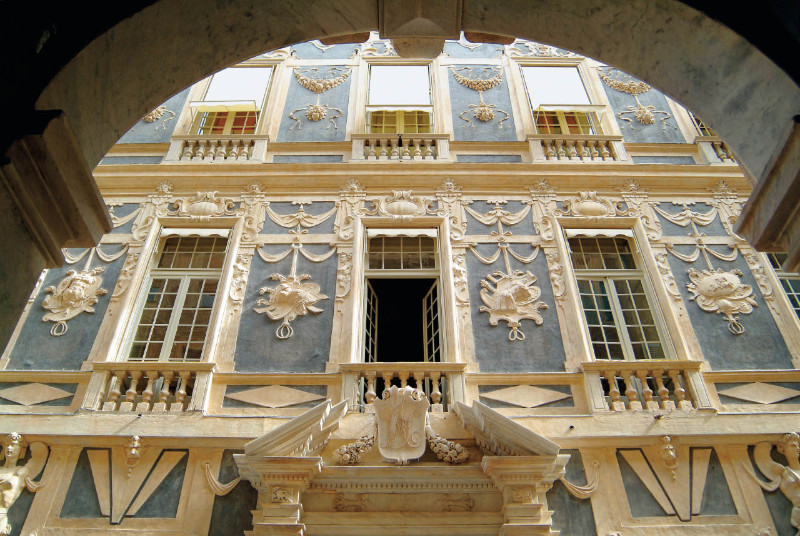 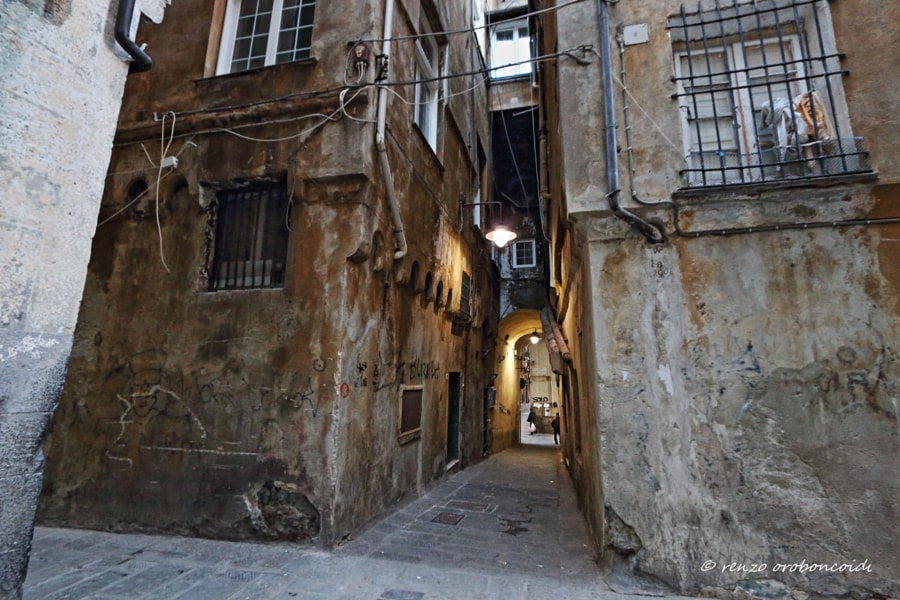 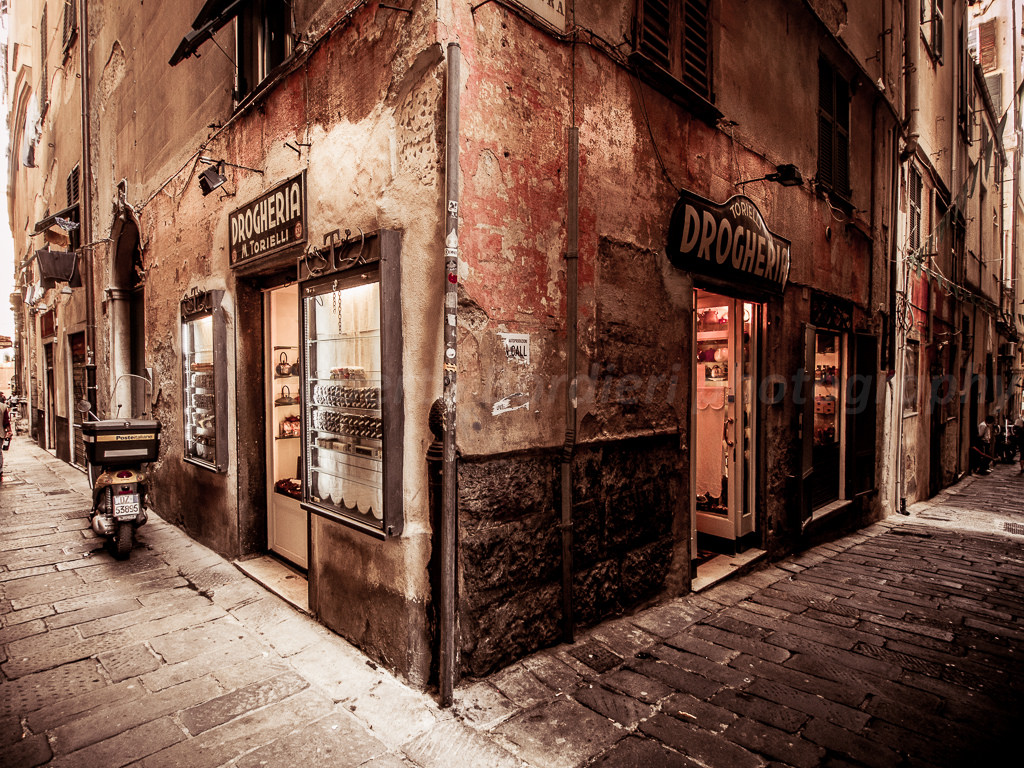 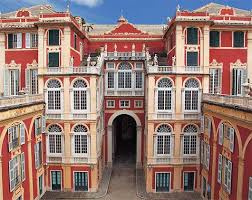 In Italy, if you say ‘the city of Lanterna’ you expressly mean ‘the city of of Genoa’ (N.d.T.); a place of picturesque and obscure memories, of neglected buildings which re-appear suddenly from the darkness of past centuries. We are now living in a time characterized by racial and antisemitic incidents and we could go back to the past to re-explore the ‘Campo degli Ebrei’ to better understand the history of the Jewish Genoese community and the relationships it had, through the years, with the rest of the town.

The empty hollows we described above once contained crucifixes. The Jewish were compelled by the Government of the Republic in 1660 to expose them on their entrance doors, in order to confirm once more the Christian supremacy of the town. Actually, this kind of imposition was not the only one in Europe. In almost all the European countries (Italy, Spain, France, Germany, Poland and Russia), there was the rule to hang stone ‘warnings’ on the entrance doors or inside the ‘ghetto’. Let’s recall the history and the vicissitudes of this ancient and almost unknown Jewish community.

First accounts on Genoese Jews can be dated back to the Roman Imperial Age, when the community was commercially active inside the city walls. In 507 and 511 AD, two letters addressed to the community by the Ostrogoth king Theodoric proved their existence. The affluence of more Jews in the town – with a consequent increase of the community – grew only in the first half of the 12th century. This is confirmed by a prescriptive measure of the ‘Consoli del Comune’(City Council N.d.T.), dated 7th January 1134, which stated that the Jews, as well as other stranger communities, had to pay a kind of ‘living tax’ (three coins yearly for supplying the oil for the lamp placed on the altar of San Lorenzo cathedral) .

On 16th April 1158, the name of a Jewish trader is reported for the first time, namely Jusuphus Judeos, who appeared engaged in the establishment of a commercial activity in an official deed drawn up from the public notary Giovanni Scriba. During the 13th century, the Jewish community increased in number and its members specialized in peculiar trades and professions, with evidence of traders of wheat, salt, indigo, spices, and slaves (certain Marvanus Judeos excels in this disagreeable business, wide-spread also among Christians). So that the community developed and became richer, setting stronger in its own ethnic-religious identity. This period is also notable for the construction of a new Synagogue (it seems that the first one, built in Roman Age, stood in the same area of the Cathedral of San Lorenzo). The Synagogue was constructed inside a building outside the center of the town, probably close to Vico del Campo. Paganus Judeos was entrusted to teach the children the Psalter and the Tanach. The condition of the Jews who lived and worked in the Genoese possessions overseas (Aegean Sea and Black Sea), probably fared better than their  co-religionists who inhabited Genoa.

In Pera (trading area of Constantinople), the Jews enjoyed the same rights as the Genoeses, as well as the Jews of Caffa in Crimea, who achieved positions of public prestige during the 14th and 15th centuries. Many of them were appointed to diplomatic offices (Chocos Judeos was sent as ambassador to the Tartar Khan of Crimea). Most Jewish people settled in Caffa were well integrated in the traditional commercial and financial activities (loans). Even in Famagosta (Cyprus), Jews were many and active in various fields. A more dynamic and remarkable medieval settlement was located in the isle of Chio, where the Jews lived in a quarter of their own – the Giudecca – and traded mainly in mastic. Coming back to Ligurian settlements, it is very interesting to observe that during the 18th century, the relationship between Christians and Jews gradually strengthened. Together with mutual respect, they were able to live well together. A rather odd event testifies all of the above. We understand that in 1435, in the town of Sanremo, the local authorities were worried about controlling the sale of the palms and cedars, so to reserve part of them to the Jews, who used to buy them for the celebration of Sukkot (Hut’s Feast ).

The Republic of Genoa, after the Act of the Sovereigns of Castil in 1492, which banned Jews from Spain, welcomed some ‘Sephardim’ exiles. This immigration was accepted by the Genoese people with conflicting feelings: religious prejudice (neither ethnic or biological) and social-economic pragmatism troubled the peace of mind of our ancestors. In fact, Sephardim Jews (Sepharad in Jewish means Spain) were well-known for their wealth and commercial skill; so they could represent an excellent and necessary ‘graft’ for the Genoese economy of 17th century, troubled by a crisis, made heavier by the great plague of 1656, which reduced the inhabitants of the town from 180,000 to 92,000. Was it possible that some good Christians came to an agreement with a descent on which a slanderous and terrible charge of ‘deicide’ was hanging over?

With many doubts (the Catholic Church considered unfavorably the expansion of the Jewish community), the Government of the Republic finally decided as a compromise to create a small quarter – including the area of Vico del Campo, Vico Untoria and piazzetta Fregoso – to allow the first three hundred Jews to come by ship in 1493 from Barcelona to settle down in that area, which, starting from 1660, became the real ‘ghetto’. The ancient ethnic merge came to an end. The area was surrounded with high railings and provided with two passages watched by the ‘Massari’, a special watch-guard put in charge of blocking the area from 1:00 am until dawn, in order to avoid direct contacts – commercial and/or sexual – between Jews and Christians. However, the Government allowed the Jewish community to build a new Synagogue. This one, which we have lost track of, found place, as well as the medieval one, in a building located between Vico del Campo and Vico Untoria.

According to some research, in 1662 the Jewish community amounted to 203 people, while in 1674, when the ghetto was transferred in Piazza dei Tessitori, the community decreased to 174 unita. This was due to a certain hardening in position by the Government of the Republic against the Jewish community, paradoxically accused to increase its incomes despite the economical recession by which all the town was troubled. The consequence was the moving of many Jewish families to Leghorn and Casale Monferrato, where two communities of co-religionists prospered. What kind of relationship linked Christian and Jewish Genoeses in the 15th and 17th centuries, beyond the official authorities’ attitude, conditioned by a sort of antisemitism considered more ‘economic’ than religious? According to recent and reliable studies, concerning said period of time, the Genoese inhabitants did not show to the Jews an unlike attitude as that one showed in other Italian towns. Inside the walls of the Superba (Proud, synonim of Genoa N.d.T.) it is likely that bloody episodes of violence did not happen, but it is likely as well that the Jews were often reserved some kind of unfair ‘attentions’.

They were compelled to attend sermons (even if several Jews used to fill up their ears with wax before entering the church) in the Chiesa delle Vigne or in San Siro; then pushed out of the church by German mercenaries (odd coincidence) to be insulted by the crowd which pelted them with cabbage-stalks, tomatoes, eggs and stones. Intolerance and violence against Jews were therefore a sad reality of Genoa in those centuries, even if those abuses of power were never established as it happened in other places in Italy. In Rome, for instance, Jews were obliged to run a sack race on the occasion of obligatory feasts, in order to gladden the crowd.

In Toulouse, on Easter Day Jews were obliged to march under Santo Stefano’s entrance door, to be slapped in the face by a prelate, who wanted them not to forget the martyr of Jesus Christ. As we know, intolerance against Jewish reached out worse and heavier levels , such as German, Polish and Ukrainian ‘pogroms’: they were real slaughters organized and blessed by the civil and religious authorities. This did not happen neither in Genoa or in Italy, where most of the middle classes and the clergy opposed to those violent and persecuting practices. In 1679, the forced enclosure of the Genoese Jews came to an end. Since this date, they were no more obliged to live in the ghetto and consequently they began to settle in the area close to the Freeport warehouses.

The daily life of the Community developed around Piazza dell’olmo (once called ‘Piazza degli Ebrei’) where, in 1752, thanks to the liberalism of a new government positively influenced by the trends of English and French Deism and Enlightenment (the treaties on religious tolerance by Toland and Voltaire had been well accepted by the Genoese commercial and cultural bourgeoisie) an inter-ethnic Christian and Jewish pole developed on cultural and economic basis. For what concerns the true integration, Jews had to wait until the Congress of Wien (1815), when they reached the complete equality of rights. It was only after the annexation of Liguria to the Kingdom of Sardinia and Piedmont, more precisely under the reign of Carlo Alberto, that Jews were granted civil rights and equal dignity. Since then, the Genoese Jewish community, holding intact its historical, religious and cultural identity as well, began to exchange freely and intensively with the rest of the town, giving its important contribution to the development.