Federico da Montefeltro (1444-1482), Duke of Urbino, was known for his liberal policy towards the Jews. He invited them to settle in his Duchy, which included Gubbio, Cagli, Fano and Sant’Angelo in Vado. Jews were given license to practice trades and professions and some representatives of the community sat in court as the Duke’s advisors on financial matters. The Jewish community grew so large as to constitute, at the end of the fifteenth century, almost one third of the population of Urbino. 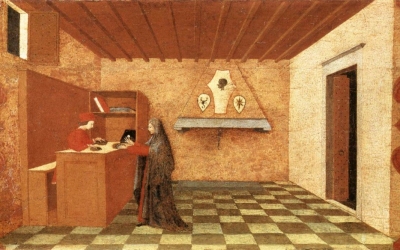 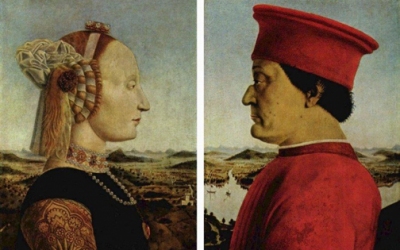 An exceptional document from this period is the predella painted by Paolo Uccello between 1467 and 1468, on behalf of the Confraternity of Corpus Domini. It narrates, in six episodes, the alleged desecration of the host by a Jewish family, their punishment and condemnation to the stake. The work is now exhibited at the Galleria Nazionale delle Marche in the Palazzo Ducale in Urbino.

The recurring motif of Medieval anti-Judaism and the crudeness of the torture scene (which includes women and children) may have been meant to reassure the Church – of which Federico was a strong ally – regarding his inflexibility as a defender of the faith, as well as a warning to the Jews to observe rules and boundaries.

The climate of tolerance and prosperity continued under Duke Guidobaldo, but changed radically during the sixteenth century when the Duchy began to gravitate into the orbit of the Church and even more from 1631 onwards, after the annexation of the Duchy to the Papal States. The Jews were confined in the ghetto of Via Stretta until 1861, when Urbino was annexed to the State of Italy.