AFTER HIS VICTORY IN THE FIRST JEWISH WAR TITUS sent back to Italy many thousands of Jewish slaves. Some went to Rome and the records also indicate a large number were shipped to the ports of Apulia (now called Puglia), the extreme southeastern region of Italy facing the Adriatic Sea. Most were soon enfranchised by previous Jewish settlers or bought their freedom, for Jewish dietary laws and their refusal to work on the Sabbath made them difficult slaves and the owners were glad to get rid of them at a reasonable price.

The records are sparse in the next two centuries though we know the great historian Josephus wrote his major works at the imperial court in Rome. In Trajan’s time, 98-117 A.D., three Jews, all descendants of Herod the Great, were recorded as being Roman senators, the top echelon of Roman society. In 212 A.D. Emperor Caracalla issued the famous edict by which all free inhabitants of the Empire became Roman citizens. This was of particular importance for the Jews because it became firmly established that in legal terms the Jews of Southern Europe and those parts farther north such as Austria and South France were citizens with full rights, not “strangers” as depicted in Germanic law. Thus, in the centuries following in these areas-except Spain, where the influence of the conquering Germanic Visigoths prevailed-the Jews for the most part were conceived in less alien terms than elsewhere and were not legally considered chattel of the lords to be squeezed and then discarded at will. Most of all this was true in medieval Italy from the fall of Rome to the thirteenth century, and to the very late fifteenth century in Sicily and parts of the extreme South before the Spanish conquerors imposed the 1492 edict in their Italian possessions.

By the third century Jewish funeral inscriptions indicate definite settlements in the Southern cities of Bari, Oria, Capua, Otranto, Taranto, and above all at Venosa. These were important stops, or accessory routes, on the Via Appia, the Appian Way, the main trade route to the Eastern Mediterranean and Byzantium. The Via Appia, which linked Rome to its end in Brindisi, the main port city on the Adriatic, ran through Capua, Venosa, Taranto, and Oria, and was a catalogue of Jewish settlements. The Jews on this route formed a chain in the international trade, lived on friendly terms with the rest of the population, and suffered equally with Christians from the Saracenic and Northern invasions. Also it should be pointed out that earlier, in the first century, evidence–though more literary than epigraphic–indicates that there were extensive Jewish settlements throughout Sicily, especially at Syracuse, Palermo, Catania, Messina, and Agrigento.

Cecil Roth in his definitive study The History of the Jews of Italy points out that the Jews were fully integrated into the Italian economy. There is no evidence in these early times of moneylending. Epitaphs indicate Jewish painters, physicians, actors, poets, as well as the more lowly trades of butchers, tailors, fishermen and other crafts. There were peddlers in abundance, a Jewish trade throughout the ages. The Jews were not upper-class in Imperial Rome. Some were middle-class but the majority were poor. Women were renowned as fortune tellers; from much earlier times, going back to Babylonia, Jews were considered masters of black and white sorcery. There were also many beggars. The poet Martial complained that it was difficult to sleep in Rome because of the noise caused by Jewish peddlers and beggars. Juvenal also satirized the Jew as a beggar who lived on the streets, sleeping on a pile of hay. That they were numerous is without question because statistics indicate that Jews formed seven percent of the Roman Empire population compared, for example, with one percent of Germans when Hitler accused them of controlling Germany, or less than three percent of the present American population.

The extent of the Jewish Diaspora in those times indeed is almost unbelievable; a rather recent dig in the northern Spanish province of Aragon found Maccabbean coins. [2] It is possible however that they were brought there as souvenirs by retired Spanish soldiers serving in the Tenth Legion, the conquerors of Judea in the First Jewish War, for the father of Emperor Trajan, whose family came from Sevilla, was commander of the Legio Decima Fretensis.

We have no evidence of any Italian synagogues from the classic period or even from the early Middle Ages despite the great Jewish population except at Ostia, Rome’s port, and a more recent discovery at Bova Marina, a small town in Southeast Calabria. As to burial in underground galleries with recesses to receive the dead bodies, there are or were catacombs in Oria, Venosa, Sardinia, Malta, Noto Vecchio, and Syracuse in Sicily, and especially Rome. Most were small and have been sealed or destroyed through landslides and earthquakes. These are mainly from the first through fifth centuries.

The Jews in Imperial Rome lived in peace. Sejanus, the crafty administrator under Tiberius, tried to deport them but in the process, for other reasons was murdered by order of the emperor. Except for a brief ordeal of similar import under the mad Caligula, who ordered them to worship him as a divinity, they were considered innocuous and indeed were undisturbed during the two Jewish Wars. They were specifically exempted as well from certain municipal obligations that involved pagan rites.

This tranquillity changed with Constantinius, or Constantine the Great as better known, who in 330 moved the capital from Rome to Byzantium. Then the Jews were progressively degraded: intermarriage, unless turning Christian, became a capital offense; then having Christian slaves was forbidden; then new synagogues were forbidden. The continuing campaign was successful and, a great part converting to the sister religion, reduced Jewry to an insignificant number in central and northern Italy. This was less true in the South, where the Emperor Honorius specifically referred in one decree to citizens “belonging to the Jewish superstition, wandering about Apulia and Calabria.” [3] That the Jews were not alone in being so reduced can be shown however by the fact that between the third and fifth centuries the population of Rome itself dropped from about 750,000 to 50,000 persons as a result of the constant civil wars and barbarian invasions. Jewish life, thereafter, became concentrated in the South of Italy.

In the sixth century Byzantium conquered all Italy, holding the southern part for a half millennium, to the eleventh century. The greatest Jewish population was in Sicily, indeed continuing until the 1492 expulsion ordained by the Spanish overlords. Oria was the capital of Byzantine Italy and the largest Jewish center after Rome. The rise of Islam caused new complications; the Saracens took western Sicily with Palermo as their base; in 846 they actually conquered Italy up to Rome, where they sacked the Basilica of Saint Peter; and by expansion held all Sicily for two centuries.

A curious and only recently discovered fact is that South Italy was responsible for the reemergence of Hebrew as a living language. The earlier catacomb inscriptions are mainly in Greek, the lingua franca in trade tying the West to the East. Perhaps one-quarter were in Latin; only a few phrases like Shalom appear in Hebrew. About the year 800 a remarkable change took place; the main source, Venosa, has flowery Hebrew inscriptions showing a wide knowledge of Jewish literature as well. Starting in the ninth century there emerged schools of Hebrew poetry. The development probably came through the Saracenic occupation, for Arabic, a fellow Semitic language, is well known for its great poetic tradition. The Josippon, the Hebrew chronicle modeled on Josephus, was written in South Italy in the tenth century. So were the Pesikta Rabbati, the midrash on the Song of Songs: the Alphabet of Ben-Sira; and one of the oldest handbooks of Jewish religious practice of the post-talmudic period called the Halakkot Kezubot. All these, formerly attributed to Spain, now are known as products of South Italy. 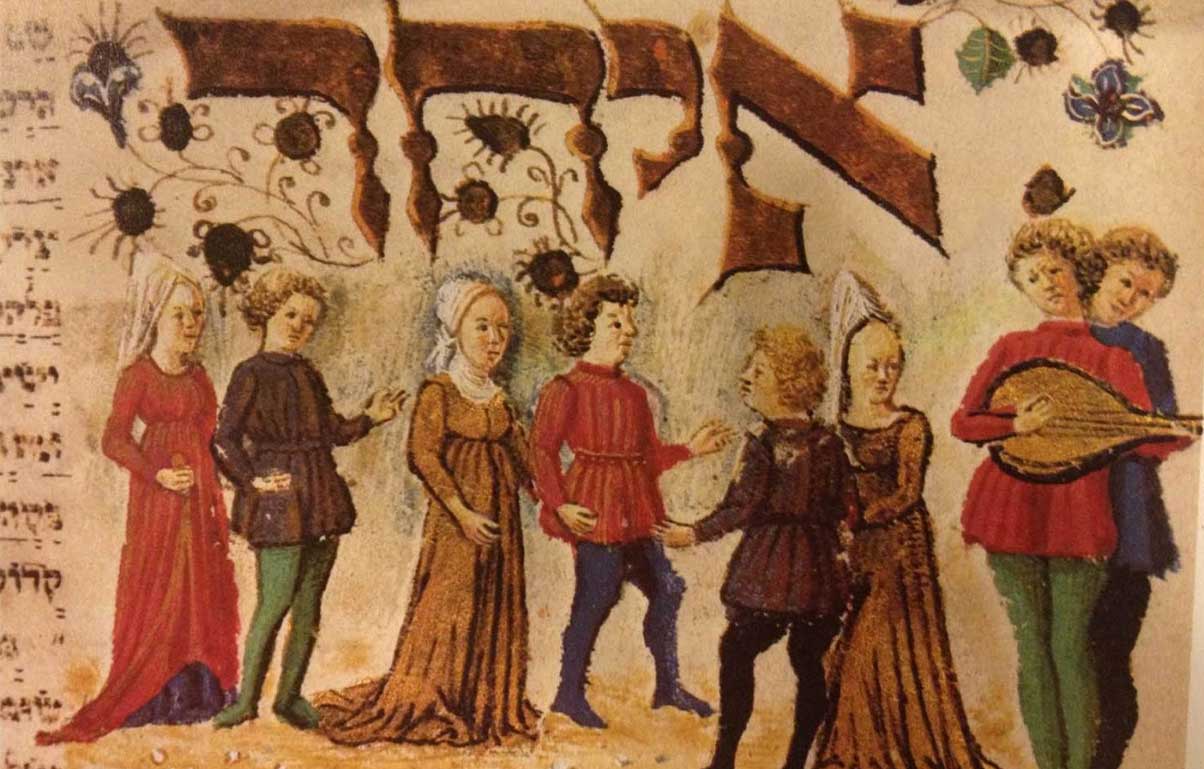